Learn the Truth Behind Spiritual Awakening

What is a Spiritual Awakening?

A spiritual awakening can happen spontaneously or as the result of practices like meditation. These experiences vary and are unique to each person. In general, a spiritual awakening tends to broaden the types of things someone is capable of experiencing. A person might feel very different than they did before. They might feel more sensitive to their outer and inner worlds and may also have experiences that are difficult to communicate in words. According to our research, this is because all spiritual experiences are the result of biological evolution. This process of evolution is what causes spiritual awakenings and genius. When this process does not work correctly, insanity can occur in some rare cases.

Signs of a Spiritual Awakening

Kundalini – The Mechanism Behind All Spiritual Experiences

Ancient cultures knew how to achieve Higher Consciousness. But somewhere in the ancient past, much of the knowledge was lost. Only bits and pieces of this knowledge remain. Most noteworthy, the ancient Indians identified a special relationship between the reproductive system and the brain. This relationship was observed countless times in ancient masters who reached Higher Consciousness. This link between the brain and reproductive system, combined with the other processes in the body that led to Higher Consciousness, was called Kundalini by the ancient Indians. This hidden biological system is a part of the metabolism that we all have, and Kundalini is a part of everyone. The only difference between individuals is whether or not it is "active," meaning that it is accelerated. Kundalini is not only the cause of Higher Consciousness, but of all spiritual awakenings and experiences.

The Kundalini Experimental Project is a massive research effort conducted by the Emerging Sciences Foundation. The purpose of the project is to awaken Kundalini in test subjects to improve their chances of achieving Higher Consciousness. We also want to scientifically demonstrate the existence of the Kundalini mechanism. We hope to invite skeptical scientists to investigate Kundalini.

An Opportunity to Transform Yourself and the World

Thousands of years ago, in various parts of the world, a major discovery was made – an intelligent mechanism in the body responsible for the process of spiritual awakening itself. In India, the name used for this discovery was “Kundalini.” On the physical level, Kundalini exists as a metabolic system whose purpose is to upgrade the brain and to elevate it to higher forms of consciousness. There is overwhelming evidence that ancient cultures knew about Kundalini and the methods to accelerate it, which can result in profound physical and psychological effects. Due to these effects, and since it is a natural process, Kundalini can be studied and measured just as any other area of science. Learn more about how the Kundalini Experimental Project works and how it will assist in your own process of personal growth.

Kundalini isn’t just “Kundalini Yoga,” as most people know it by — it actually represents the biological basis of all spiritual experiences and, we believe, the force driving the evolution of humanity. The Kundalini Experimental Project is designed to provide you the information you need to be your own “guru.” Take your spiritual destiny into your own hands and participate today. Learn more about the difference between Kundalini Yoga and the science of Kundalini.

The Kundalini Experimental Project is designed to both increase our scientific understanding of Kundalini, and to help people navigate — and even accelerate — their own Kundalini process. Our volunteer researchers are working hard on understanding the data we’ve collected so that we can deliver our findings back to you through the project. See the latest research at KundaliniWiki.org. The information on KundaliniWiki is highly technical, but we will soon be delivering findings and insights in a simple, easy to understand way through the Kundalini Experimental Project. Learn how to participate below.

Here are the ways you can contribute and get involved

A free and easy way to receive customized spiritual recommendations. Help us unlock the secrets of spiritual evolution. 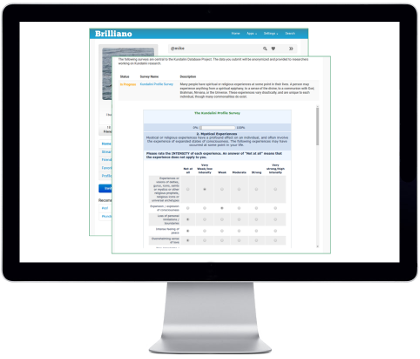 Join the most revolutionary research project in history

To begin contributing data to this interactive research project, sign up on Brilliano.com 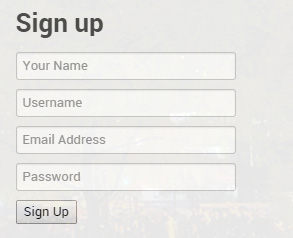 Sign up on our mailing list to receive updates. As soon as our analysis is made available in the Kundalini Experimental Project we’ll let you know. Also, in 2016 and 2017, we will be working to gather important data on the biological effects of Kundalini, including metabolomic (blood) data. Read the proposal here. Use the sign-up form to add yourself to our mailing list to receive notifications.