Many of us with indigenous roots have a strong sense of community with friends and family – a trait that has allowed our people to survive tough hardship since the European colonization of the Americas. Today, some of our community building is plagued by frivolous spending, criminal behaviors, and alcoholism. Our ancestors, however, built their communities through ceremony and rituals, incorporating song, dance, worship, and group activities. Recently, we had the rare privilege and honor to participate in a two day ceremony where we caught a glimpse of how our ancestors built their communities. In it, we found tremendous strength, beauty, and wisdom.

Celebration of a Spring Fertility Goddess

The ceremony began with the celebration of Cipactli (also known as Tlalteotl), a destructive and yet regenerative feminine Earth goddess. We fasted with nothing but water to drink, a sacrifice to Cipactli in recognition for her providing all that we need to live. During the day of fast we worked, and were split into groups with each group having a task – even the children had a task. Afterward, we gathered to listen as an elder told us the story of how Cipactli, a fearsome and all-consuming goddess with many mouths and eyes, fought with Tezcatlipoca, a masculine creator god. During the battle, Tezcatlipoca and his brother Quetzalcoatl transformed into serpents and tore her in two. The bottom half became the heavens, and the top half became the Earth. However, Tezcatlipoca did not escape harm and had his foot bitten off by Cipactli, which was later replaced by a mirror. 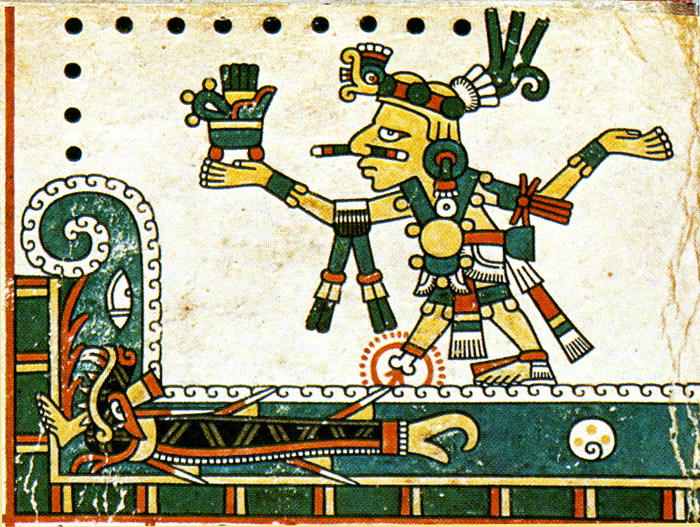 Symbols are used in science to represent ideas that require more explanation, for example, the formula E=mc2. The myths of ancient cultures work in a similar way. The meaning of the Aztec myth of Cipactli becomes more clear if we look at another ancient myth with very similar symbology found in Indian culture. In India, the most common symbol of a destructive feminine god can be found in the myth of Kali and Shiva. In this myth Kali, a goddess of destruction, begins slaying men and demons alike, and can only be assuaged when her consort Shiva arrives and lies motionless on the ground, allowing Kali to dance on his body. It is only through this act of surrender that Kali is calmed and the universe restored to balance. 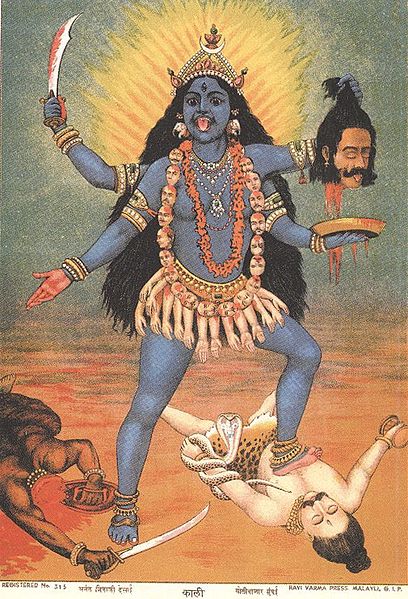 Among other things, both Cipactli and Kali are cosmic representations of the concept of entropy – the tendency of all life to disintegrate and be destroyed. In nature, entropy plays a critical role in the regeneration of life – cells must die to make way for new ones, winter clears the way for the abundance of spring, the explosive formation of stars results in conditions ideal for life to arise, etc. This basic idea must have been obvious to ancient cultures, and it should come as no surprise that in the Aztec and Indian traditions, both Cipactli and Kali are not only goddesses of destruction, but also of creation, which is why Cipactli is celebrated during spring.

Another clue to the meaning of this Aztec myth is that in the Indian tradition, Shiva represents the pure consciousness behind the universe. In that tradition, for life to arise in the physical universe, pure consciousness must take a part of itself and combine it with Kali, the essence of physical reality, to create living beings. Tezcatlipoca made this sacrifice when his foot was bitten off, which is essentially the same sacrifice as Shiva’s submission to the dance of Kali. The mirror on Tezcatlipoca’s foot symbolizes self-awareness, a feature inherent to sentient life.

The Serpents and Kundalini

Modern science has no clear explanation as to why dead matter should self-organize and evolve into life in the first place, or why living organisms should be self-aware or conscious at all. It seems strange to assume that there is no underlying intelligence in such an orderly and self-directed universe. Ancient cultures likely asked similar questions, but instead of looking for answers through the material sciences, they turned their attention toward the inner world of consciousness.

The myths of Mesoamerica suggest that they, like the Egyptians and Indians, had discovered a biological mechanism in the body responsible for the evolution of consciousness and the brain, and all spiritual experiences. The ancient Indians called this mechanism “Kundalini,” meaning “coiled serpent power.” Kundalini is often depicted as two serpents, Ida and Pingala, which represent the lunar and solar aspects of consciousness. They are coiled around the spinal column which they called Sushumna. In Mesoamerica, similar symbolisms can be found in the god Quetzalcoatl. What is interesting is that modern science has a very similar idea of the nervous system, in which the parasympathetic (Ida) and sympathetic (Pingala) branches of the nervous system control many functions of the body. 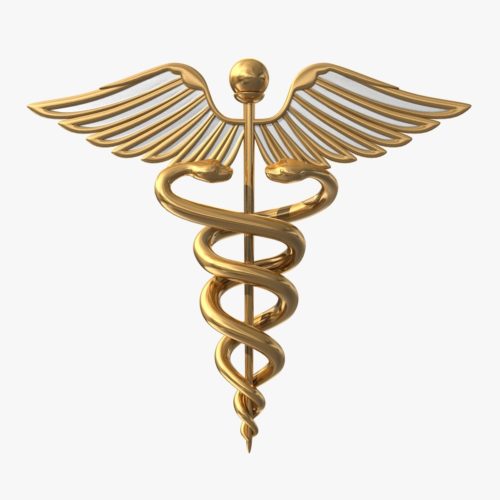 The Caduceus is an ancient symbol likely representing Kundalini. Quetzalcoatl was sometimes referred to as the “feathered serpent”

When European invaders swept into the Americas and Egypt, it is likely that thousands of years of accumulated knowledge on the subject was destroyed through murder and outright vandalism. The destruction of the Aztec and Mayan Codices in America and the Library of Alexandria in Egypt are examples of this type of ignorant destruction of wisdom. Because of the geographical boundaries and difficulties in sending in military forces from Europe, one system of wisdom still remains largely intact – that of India. These three great cultures, the wisdom cultures of the Americas, the Indians, and the Egyptians, have always been united by a common thread of ancestral wisdom.

In the Indian tradition, when pure consciousness (Shiva) manifests itself in physical form, the universe arises in that person as the experience of life. When that person dies, the universe ceases to exist. Cipactli was split in half by two serpents at the moment the heavens and Earth were created, suggesting that consciousness is what creates the universe. We believe these serpents represent the dual nature of the nervous system and human consciousness. In another Aztec myth, the gods of life and death appear with spines united, in similar fashion as Ida and Pingala. 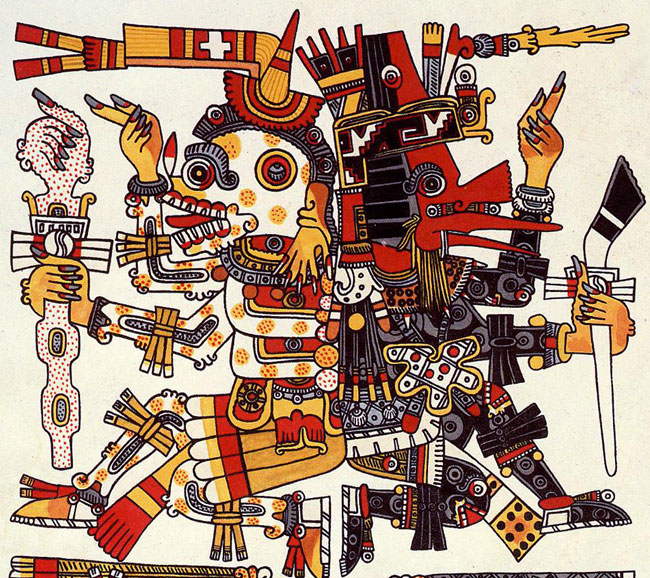 When Kundalini begins working in the body, physical symptoms related to the nervous system are extremely common. According to our research, one of the most common physical symptoms related to Kundalini is sensing energy or tingling up the spine. The reproductive system may also play an important role in the Kundalini process by delivering a more potent fuel to the brain through the spine, which helps bring about spiritual experiences, and ultimately higher consciousness.

We believe that these two ancient myths are based on profound spiritual experiences. In a rare number of these cases, the limits of the normal human brain are transcended in an experience we call Higher Consciousness. In a recent study conducted by the Emerging Sciences Foundation, data from hundreds of individuals around the world revealed a pattern within the most profound of these experiences, which is characterized by:

The consciousness perceived in this state, its interaction with the world of the senses, and the spiritual experiences leading up to it, is something that has been written about for thousands of years, and is very likely at the root of the Cipactli and Kali myths.

One of the the most important changes that occurs as a result of Kundalini is the transformation of personality. Our research suggests that a person with a properly functioning Kundalini generally has a lack of greed and materialism, is more loving, and is more sensitive to the well-being of the world and those around them. If we take a look back at history and examine all of the civilizations that fell, we find inequality and immorality as a common thread. This happens when we live against the laws of the Kundalini mechanism regulating the brain, which demand a more moral personality in order to evolve properly. The myths and religions of the world exist today, even after thousands of years, because of these laws. 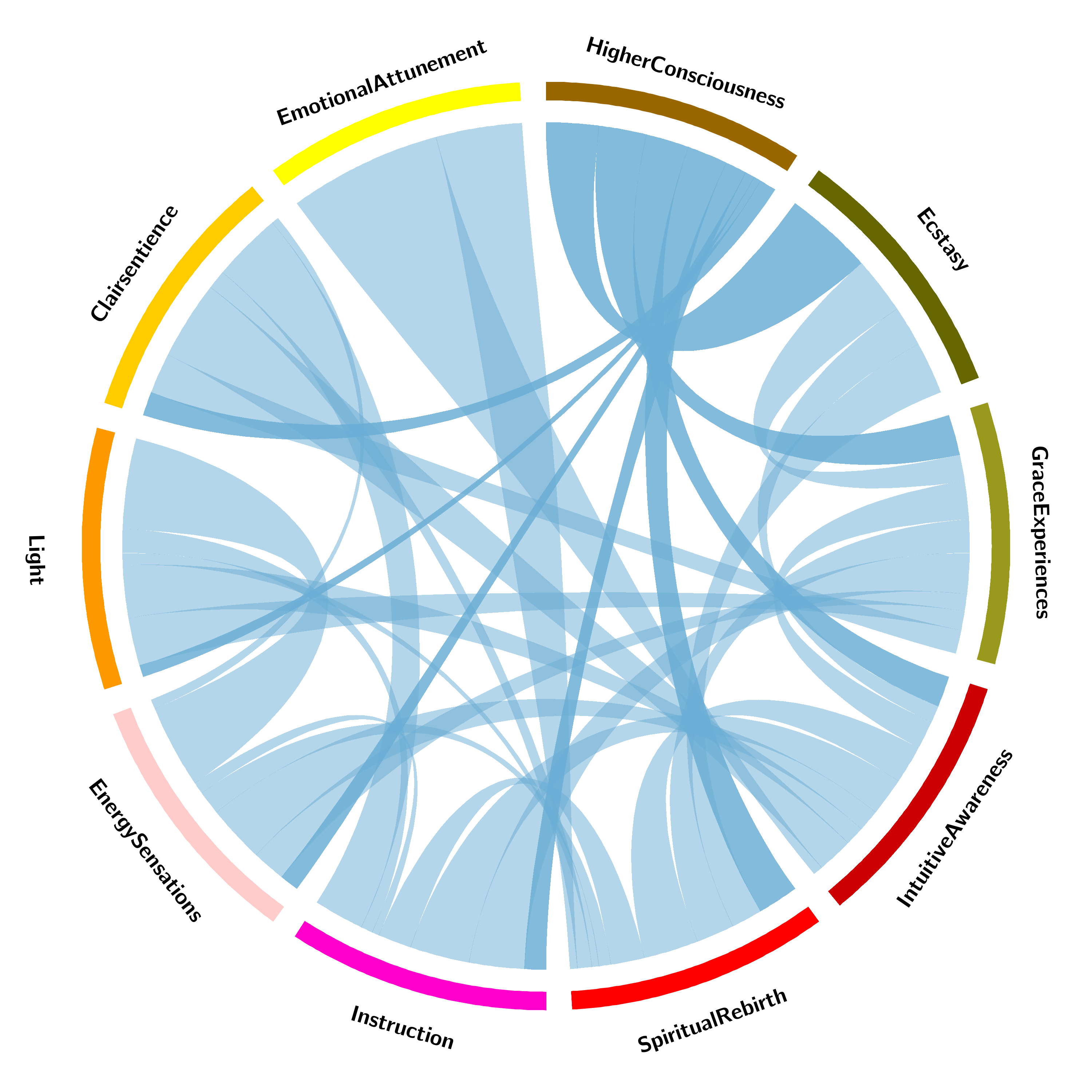 In times like these, sacrifice becomes critically important. The most important sacrifice is not of material possessions or even of the physical body, but is instead an offering of our own personalities. The finished products of the Kundalini mechanism – all the great saints and mystics of history – were in essence reborn into their same body as a servant for humanity and the Earth. Both Shiva and Tezcatlipoca were giving of themselves in this way. We find in our work and in our research that the true sacrifice is one that is done in the flesh, for something greater than yourself.

On the final day of the ceremony we were united by a single thread as we walked to a nearby mountain to reenact our ancestors’ nomadic journey. The morning sun embraced us with its warmth, and soon we were amongst the clouds. When we came to our resting point and sat together, we learned songs that were sung in Nahuatl – an Aztec language with many dialects. When we returned, we were greeted as travelers, welcomed as sisters and brothers, and served a delicious feast of native foods. It was truly beautiful. 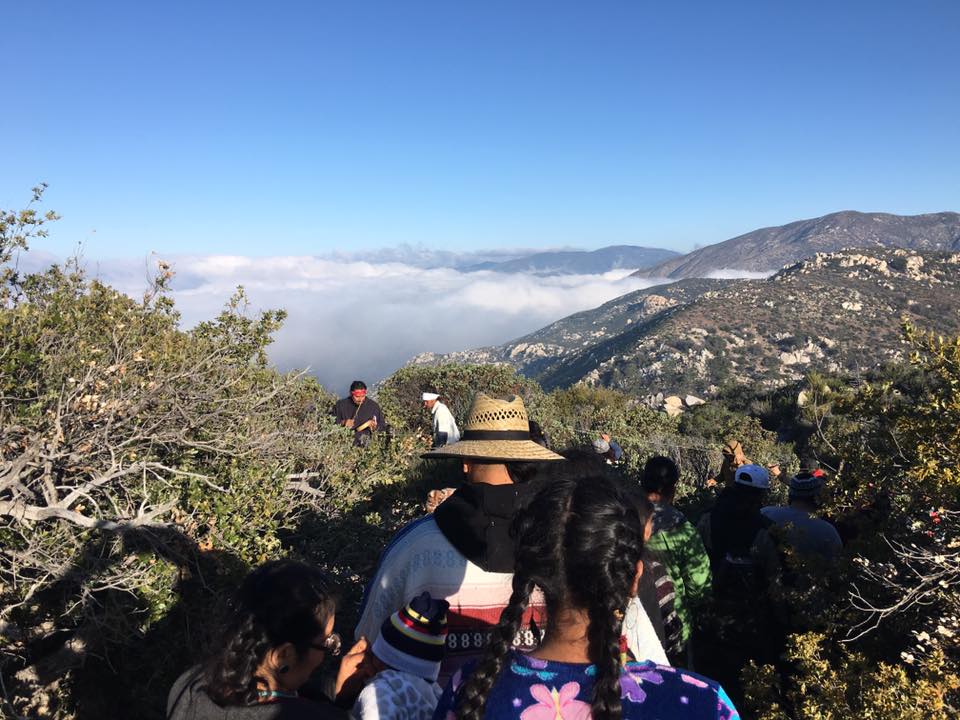 We believe that there are two threads that unite our people – one visible, and one hidden. One thread is the thread of our ancestry and cultural heritage which has bound our people together for ages. The other thread is one of wisdom that runs through all people and the fabric of the universe. The time has come to weave both of these threads together and end our disconnected way of living by unifying ancient wisdom with current understanding. Our ancestors believed everything to be sacred. Through ceremony and rituals, they helped preserve balance with the Earth, strengthen the community, and bring about a happiness that no amount of material possessions can bring.